Ok…if anyone is terribly shocked that Jordan Davis’ murderer was not charged with his death get your head out of the sand!  Just as Trayvon Martin, Emmitt Till and countless others who were lynched simply because they were Black Men, there will be more to come.  As racism has the dye cast, rooted and steeped in tradition, we realize we have been involved in a dysfunctional relationship with an oppressor; and ourselves.

As I checked my Twitter last evening I noticed Roland Martin intimating “let’s get ready for “the march!”

This is an old, predictable tactic.  Marches ability to stymie or shake racism to the core fail to eradicate racially hostile schools and communities.  In the words of Adam Clayton Powell, Jr. who lead marches in Harlem boycotting bus companies who scarcely hired African Americans and stores that only allowed Black People to shop but not work in stores they could shop in; “eventually get on people’s nerves!” Referencing the March on Washington in 1963, Powell mentioned that he not only used that tactic 20 years prior, he zoomed in on the title of Dr. Martin Luther King’s speech “I Have A Dream”, stating that his speech would have been entitled… 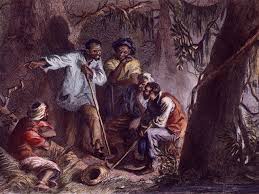 A PLAN!  That means the first order of operations is to CEASE AND DESIST all strategies, efforts, and works to “break into” a dysfunctional relationship with an oppressor that has long since moved on.  Crashing glass ceilings and ivory towers may have eked some of us into a position to help; yet rarely enough to saturate where the benefit was leveled, let alone satisfied. If only WE went that hard for our own institutions…oh that’s right: WHAT ARE THEY?!

**Think about it, if you had all the money and power in the world off the backs of someone else, even if you knew it’s wrong, would you be that willing to write a check to eradicate a “moral debt?!”

Other ethnic cultures of color got a clue early.  Not to oversimplify African American’s struggle in this country, yet I notice a completely different mindset among West Indians, Africans and Haitians. Don’t get me wrong, some African Americans get it in the midst of hard core, ingrained institutional racism. Yet I see these ethnic cultures of the African diaspora becoming franchisees or creating businesses to build wealth as an affront to unfair hiring practices.  I see neighborhoods being developed and purchased. A school for allied health careers was created and taught by Nigerians as to serve their own who encountered educational challenges.  Years ago a local teacher started a preparatory school with an Afro-centric curriculum, taking so-called “at-risk” kids and converting them into scholars.

From another perspective East Indians in my neighborhood have erected several temples and strip malls with stores that cater to the needs and culture of East Indians; only.  Native Americans who an oppressor literally obliterated off the face of the country are doing more than casinos…they have the payday loan business on lock!

AN OPPRESSOR WILL ONLY ADVANCE A CAUSE WHICH SERVES TO ENHANCE THEMSELVES!

My doctoral hooding was filled with tears from family and friends; I, as my Mother said a year before her passing, would be the first.  As my parents could only watch from Heaven, their experience with the Jim Crow south is what informed the pact they made as a young married couple: our kids are going to college. My parents told my sister and I that we could go as far as we wanted; Masters and Doctorate respectfully. The ancestors spirits guided me through many a night of study, anguish, racism and doubt.

Am I suggesting that the infamous “hoodie” becoming a symbol for justice for Trayvon Martin is a panacea?  Is the fact that so many people of color, especially boys and men are associated with negativity based on wearing a “hoodie” (which in my day was just a sweat jacket with a hood…but I digress) the reason why they are suspect, and we need a new image?  Answer to question #1: NO!  Answer to question #2: YES!  We need a new image!!

The image of that little mortar board on little Trayvon Martin beyond 6th grade instead of matriculating to an orange jumpsuit, sagging pants, and so-called gangster attitude.  The image of African American/Black marriage and family being as top a priority as pursuing the highest heights of education.  The image of home ownership instead of driving a luxury car and living in a rented shack. The image of financial stability versus barely making it.  The image of entrepreneurship as the “first choice”. The image of reading, speaking, and articulating for debate, discussion, and delineation.  The image of playing outside…again – without fear of getting shot, stabbed, or kidnapped.  The image of African American/Black Men protecting their neighborhood and their family; and checking each other when they make mistakes or fall.  The image of every Black Father, Grandfather, Uncle or Big Brother who knew who your parents were, and would not be shy about reporting any disrespectful behavior; and would be supported (instead of getting “don’t holla at my baby” OR “not my child“…but once again, I digress).

Look, I like my sweat jacket with a hood more than the next person; keeps my ears warm when I need to go outside for a minute.  Yet now it has become an apparel lexicon for criminal intent; proven, or not.  A profile has prevailed.  We know that racism has not exempted a suit and tie wearing African American Man from suspicion (a la President Obama, Malcolm X, Dr. King, Roland Martin, Your Father, My Father, etc.).  However, there’s something about a Black Man in a suit that makes one sit upright…stare lovingly…be respectful.

The only thing Roland Martin did wrong…was forget focused on his alleged homophobic twitter rant during the 2012 Superbowl; leading to CNN’s subsequent suspension of Roland Martin.  Currently it has been reported that CNN has lifted Martin’s suspension.  After meeting with GLAAD (Gay & Lesbian Alliance Against Defamation), and offering apology the journalist is allowed to…well, I’m not sure.

Ok…basically the suspension was lifted.  The larger message: African Americans, particularly men are prohibited from saying anything about anyone if they represent television.  Remember Isaiah Washington’s alleged homophobic comments on the set of Grey’s Anatomy toward co-star T.R. Knight, and then later at an awards show stating “I did not call him the f-word”?  Washington acquiesced and met a litany of demands to rectify the situation: his contract was not renewed.  In the words of the Spinners song “Could It Be I’m Falling in Love”…that’s funny!

Funny.  African American’s use of the “N-word” be it uttered, scripted, or “tweeted” have yet to urge a suspension or had swift action taken toward an alleged culprit.  Organizations that champion advocacy on behalf of African Americans have raised the issue.  The last time a major and/or cable network followed suit, leading to suspension of an African American man in the media was…

Moral of this story, or the message thereof sent to Roland Martin, Isaiah Washington, or any other Black Male of celebrity – continue to speak your mind on things that matter; for surely downgrading and defaming African Americans will rarely get you suspended, fired…or taken seriously.