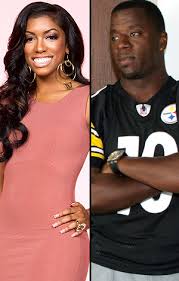 Porsha Stewart, formerly of The Real Housewives of Atlanta (RHOA) and soon to be ex-wife of former NFL great Kordell Stewart is inadvertently teaching young women that coming into a marriage with your looks and…your looks is rarely sufficient to maintain a relationship; let alone a marriage. Now you may say come on; do you really believe it was a simple as “dime piece meets trophy man?!” Ahhhhh…yeah; it was.

I have a few female friends who “married well”; however, all have career, educational, and/or philanthropic pursuits. All are beautiful externally; yet their intellect, intelligence, purpose, and drive secured a lifetime membership with a man of substance. So before you rattle off all the things a man has to have to be with you, ask yourself, “What am I bringing to the table?” One may speculate that Porsha wanted her own as she once danced in music videos and was looking to be self sufficient. Then came the knight in shining armor; BINGO! Kordell, the ultra-traditional, seemingly sexist controlling man lavished her. She loved it. She married him. She forgot one cardinal rule: he who has the gold, rules the world.

During Women’s History Month understand this ladies: GOD BLESSES THE CHILD WHO’S GOT HER OWN. Educate yourself. Save your money; monitor your credit. Love yourself beyond your external features. Allow a man to treat you with the UTMOST respect; and be of the ultimate knowledge no matter who he is…

A MAN IS NOT A PLAN!

As I am really close to swearing off television, I have to speak to my noticing reality television shows rarely: 1) Allow an African American contestant in a competitive show to be the first winner before a White cast member  (i.e. American Idol, America’s Next Top Model, etc.); and 2) Allow an entire cast (with the exception of the Braxton’s Family Values) to be African American.  Using the Real Housewives of Atlanta as a case study so to speak, the classic “we have to cast a White character for universal appeal” is painfully evident in Kim Zolciak Biermann, who has lasted all 6 seasons and has enjoyed a spinoff series “Don’t Be Tardy for the Wedding” dedicated to the events leading up to her husband NFL’s Kroy Biermann nuptials. Interestingly enough, Kim’s trusted personal assistant (token slave coonery and buffoonery laden) Sweetie who dutifully “steps and fetchits” was noticeably absent during Kim’s spinoff show.  Kim slowly began dodging events with her Black sisters.  In fact, her husband has absolutely nothing to do with the “fellas” in any way, shape, form or fashion.  I guess within the confines of the NFL he is surrounded, having little to no choice but to be around Black men.  Yet, he has made a clear demarcation on the show – and expects Kim to do the same.  So why does Kim’s subtle yet overt racists comments and attitudes get a pass. Keep reading.

You see, my belief is that the RHOA are aware of the stereotypical nature that belies

African American women on their cash cow of the franchise.  Observe:

What’s the pattern you ask?  Kim, a former nurse, divorced mother of two has been portrayed as the White girl who deserves a good life regardless of how she gets it. She has had it hard and if a knight in shining armor with his own money swoops her up from the doldrums of her married sugar daddy then so be it!  Basically we all know that if Kroy had not entered her life she would still be pining for Big Poppa!  But not once was she given the business about her tactics; or her choices.  Yet her Black sisters are readily offered up as a sacrifice for women with lowered self esteem who need to not only revere Kim, but wonder why she doesn’t want to play with them anymore.  Pitiful.  But true to form the minstrel (I mean reality TV) show will go on and these Black women will carry on, clueless: no worries Lisa Wu Hartwell, Deshawn Snow, Sheree Whitfield; whether you left the show on your own or was let go, at least you can live with yourselves.

and for that…Thanks, Kim Zolciak Biermann – YA DID IT AGAIN!