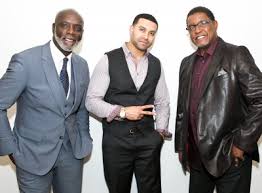 Remember BET channel’s show “Uncut” – a programming of videos too risqué for daytime television? The infamous Nelly video, “Tip Drill” was aired with him sliding a credit card down the crack of a woman’s ass drew ire from Black women in particular. Spelman College students were so incensed they asked for a conversation with the rapper before the fundraiser for his late sister who was battling cancer; he was a no show; they said “Hell No!” Interesting.  Most brothers saw those sisters as “hatin” or being too “sensitive.”  In a nutshell, not too many brothers were mad at Nelly; entrenched in the mentality that the video “ho” didn’t resist and was fully capable of saying “No” – well go ‘head blaming the victim.

So why are so many Black men exhibiting such anger toward Kerry Washington’s character, crisis manger Olivia Pope in the popular “Scandal” television series?  I’ll take as much as an objective stab at it with a subjective twist.  The Brothers Have A Problem With A White Man Being Portrayed As All Powerful Over A Successful Black Woman.  There I said it!  Now, let’s compare and contrast:

Nelly, a real-life Black Man of means had absolutely no problem demeaning a Black Woman for the world to see; how many Brothers got in his shit for that?!!

A fictional White president of the United States is having a sexual affair with a Black Woman for the world to see; and Brothers are in her shit for that?!

family.  Truthfully, too many so-called Black/African American professional women believe if their wealth does not support family who do not walk in the same success pattern she will be seen as forgetting where she comes from.  Moreover, she will be damned to hell and placed in a category of bourgeois (colloquially known as “boozhee”); this has become an excuse that some Black men use to decide she is “unattainable”; thus, she won’t mind if I drive by and get some because “she’s strong, she can handle it” (i.e. she’ll eventually get bored with me because I’m not and/or I am balling just like her).  In other words, she’s damned if she do and damned if she don’t.  Yet, all of this…is by choice.

Each one of us is responsible for our own lot.  Am I suggesting the ole “pull yourself up by your own bootstraps” philosophy?  No.  I am suggesting that if you see that relative grinding in their respective vocation…follow suit.  I don’t care if you go to college and obtain a degree or have a GED, become a cosmetologist, and open up a number of salons and a school: DO YOU!  That means sacrifice: being up earlier and staying up later.  Reading what may be considered boring as hell; reading what you love.  Networking with people who may not look like you or come from your experience; to edifying those who are best associated with your life.  Regardless of who gets it or not, go for yours: a choice.

Common sense: A man will do what you allow him to do. Period – choice.

In essence, I empathize with Mary Jane; but I don’t feel sorry for her.  Nope.  She and other “Mary Janes'” of the world have got to, for lack of terminology…GET A GRIP!  Your families will NOT fall apart if forced to get it together. Your friends will get over it (and eventually you) if forced to move forward past their bull-ish.  The Black man of your love and liking will respect you if forced to understand that you uphold standards; rich or poor – balling or scraping.