“I knew something was wrong when a pretty little White girl runs into a Black man’s arms, something is wrong here!”

The words of Charles Ramsey recounting the events that lead up to the rescue of Amanda Berry, her daughter and Gina De Jesus reminded us that the utopic post-racial society has failed to permeate.  Mr. Ramsey unwittingly turned this idea on its head further exposing what so-called Black/African American people have been living for centuries; nothing has changed.  Our election of President Obama did not change it.  Scores of African American first and foremost didn’t change it.  Upwardly mobile African Americans didn’t change it.  Nope.  Charles Ramsey’s assist in rescuing these young women did more to provide a birdseye view of how Amanda Berry freed herself.  He opened our eyes to the racist attitudes that are alive and well and exist in the United States of America.

So if you’re ever inclined to urge that everything is different and alright compared to “yesteryear”, check in with  Mr. Ramsey.  Clearly this man understands the rules; and like too many of those living in a “post-racial society”, they haven’t broken those rules long enough…to get it.

Nat King Cole was the first African American man to have a network television variety show in prime time in 1956.  At the time American south was fully segregated and plagued by Jim Crow laws; much of America was uncomfortable with any idea representative of Blacks in positions of power or thought.  Though the show was popular and the guest were vast, sponsors were not jumping on board in drolls for advertising space.  The writing in the wall, Cole cancelled his own after one year and was said to have iterated, “Madison Avenue is afraid of the dark.”  How poignant.  How relevant.  How true.

When Susan Rice decided to withdraw her bid for Secretary of State, the GOP’s campaign to discredit her handling and execution of the events in Benghazi attack was made abundantly clear.  The big guns were cocked, locked and ready to shoot.  Their assessment and attack was vehement and intentional – we don’t want you!  Yet it was deeper than that.  Rice could have been squeaky clean without blemish or concern, her appointment would have still been problematic.  At the end of the day the White House is becoming inundated with color that was not indicative of only maids, cooks, butlers and janitors.  The leader of the free world is a man of color; and for a Black woman to maintain that much power in the free world, the silent contention was that one Rice (Dr. Condoleeza) was enough…the GOP would be damned to have to go through working with a competent, intelligent African American woman again; and admit that Black women are more than maids, mammies and mamas.

To accuse the GOP of being afraid of the dark may be going a little too far…let’s just say the eclipse is on the horizon: and they are scared… 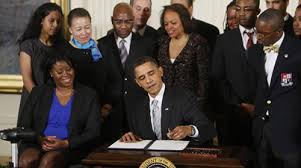 Once upon a time, Black Folk took care of business – in spite of Jim Crow, blatant racist attacks (physical, sexual, psychological).  In spite of financial and educational disenfranchisement, Black Folk used to take care of one another.  “We were family.”  It’s time we rekindle that spirit to a higher level; we have a Black President who needs our help.

Yet my parents also enjoyed a segregated school system.  Huh?!  What the hell are you talking about?!  Glad you asked.  My parents belief was that integration “messed us up”.  In other words, all their teachers looked like them and had their best interest in mind.  Unlike today, teachers, parents, preachers, doctors, and laborers worked and lived in the same community.  Everyone knew each other – there was an expectation of excellence in academics and moral behavior!  Essentially, ANYONE could straighten you out if you got out of line.  My Mom said to me, “We didn’t necessarily want to be in school with Whites, we wanted the same updated buildings, books and resources that their children were getting; the type of school resources that were denied to schools where my parents attended. Yet my parents were literate, reading obsessed people.  Less concerned with material possessions for their daughters; but more long term goals like college – a goal that was given to me instead of asked if it were something “I” wanted to do.

So What Must Black Folk Do to truly support President Obama:

1. Ask President Obama how you can help: we all have talents and abilities – it doesn’t require a degree of education; just a degree of heart.

2. Challenge President Obama by bringing a solution, instead of a complaint.

3. Become a resource for President Obama – take control of your families, your communities, and your schools by being actively involved; this provides President Obama an inside view and understanding to how he can be of assistance.

I cried when President Obama was deemed the projected winner…again!  I woke up the next morning feeling like I needed to challenge myself more…again!  Congratulations President Obama – you are supported!

…and I approve this message